River in an Ocean, an exhibition curated by Abdullah Qureshi and Natasha Malik, took place from 20 – 31 March 2018 as a part of Lahore Biennale 01’s collateral programme.

Borrowing the title from a prominent work by the late artist and activist, Lala Rukh (1948 – 2017), the curators saw the eighties an important moment of departure in the history of Pakistan, stating:

Under General Zia ul Haq’s rule anything that was perceived as a threat to ‘Islamic’ ideology was either frowned upon or banned altogether. Literature and mass media, for their obvious public reach, were the first to be monitored and heavily censored. Dance was eliminated; a ban enforced once again this year in the Punjab. Within visual arts, calligraphy and the other genres, such as painting landscapes, were encouraged as they aligned with the rationale of the state image. However, many continued to resist, in particular the women, as observed by Hashmi in her book ‘Unveiling the Visible’, where she notes, “Not a single woman artist took up calligraphy or changed her mode of working to bring it in line with official state policy”.

It was during this time that a feminist manifesto was also written by women artists in Pakistan, privately, but very much with the promise of upholding the principles on individual and collective levels by those present. The late artist and activist, Lala Rukh (1948 – 2017), was also among the signatories. Reflecting on her life and work, one can’t help but notice how, at least on the surface, her art and activism, very much remained independent of each other. While her art was an incredibly private affair, and involved a deeply poetic and minimalist aesthetic, her activism, in contrast, was strongly engaged with civil rights as a founding member of Women Action Forum (WAF) – something she remained involved with until the very end.

Building upon this, ‘River in an ocean’ examined the feminist legacy of art and activism in Pakistan through the works of 27 contemporary artists and collaborators addressing themes of gender, institutional inequality, traditional roles and spaces assigned for women, as well as the challenging of heteronormativity through queer perspectives.

Here, curators Abdullah Qureshi and Natasha Malik reflect on this larger history of art in Pakistan, and the conceptual framework of the ‘River in an ocean’ exhibition with veteran artist and educator, Naazish Ataullah.

NA: Look, the eighties are really important art historically. This has already been looked at by art historians such as Simone Wille, who look at the decade under the larger category of Modernism. To me, the turning point is actually before that… and the National College of Arts, Lahore (NCA) is instrumental here as an educational institute for fostering that change in critical thinking. It was actually in the seventies that we saw the return people (who would later go on to become incredibly influential in Pakistan), after studying and working abroad, and bringing back fresh ways of making art, as well as an art and design curriculum. For example, Salima Hashmi was key in revising the Foundation Year’s curriculum. Zahoor ul Akhlaq, who also returned around that time from England, would go on to directly critique and reinvent miniature painting as we know it today. But together, with many others, we were seeing artists starting to investigate art and art history from a wider local perspective.

AQ: Within this history, as curators, we were especially interested in thinking about Lala Rukh’s role and influence here. It was only recently that we saw her work come to international prominence – partially due to her own focus being very much on education and activism till her retirement from academia. Hence, it was important for us to start connecting the contemporary work we make and encounter within this larger history. And in particular, histories that may have remained understudied so far.

NA: Yes. Basically, for Lala these were two parallel tracks – in ways it was like that for all of us, but with her, she had her feminism, in particular her work at Women’s Action Forum (WAF), and then her practice, which she kept much more private for many years.

You know, Lala was someone who had tremendous discipline and commitment.

Focusing on WAF and activism at the time meant always being on the streets of Lahore. Every week there would be a new issue, because it was the Zia ul Haq period, which meant our rights and freedom was being threatened on a daily basis, as we saw with the Hudood Ordinances. We couldn’t stay quiet. We would always be standing in front of the Lahore High Court. Lala was always there with her camera, taking pictures and documenting the process. At the time, she was also the one who made all their posters… In this way, as well as being one of the founding members of WAF, she was also their visual advisor.

Initially, WAF was only a small group of people, but as conversations started to become more political, the group started becoming larger with lawyers and other activists joining too.

AQ: Building upon that then, we were especially interested in looking at gender from this historical lens, and thinking about how contemporary artists explore the intersections of political activism, identity, and sexuality, amongst other things within their practices.

NM: And not just that, but also looking at what a collective means and what kind of conversations collectives can generate through collaborations outside institutional and gallery spaces.

NA: Yeah, well, I think there is definitely something exciting happening right now that was not there before. You have the Tentative Collective (http://www.tentativecollective.com), and Shahana Rajani and Zahra Malkani in Karachi who have been looking at issues of the city within artistic practice through research-led approaches. Then, in Lahore you have Awami Art Collective who have been expanding conversations in the domain of community-led and socially engaged arts projects – an example being the ‘Black Spring’ project (http://translocalia.com/black-spring/).

“You have the Tentative Collective, and Shahana Rajani and Zahra Malkani in Karachi who have been looking at issues of the city”

In this sense, what really worked for me about the ‘River in an ocean’ exhibition was that it was very much to do with the here and now. Moving through the space, you felt a range of concerns that reverberated around the larger human condition. Thinking this through the lens of the eighties then one feels, even with time, the issues that affect us haven’t changed, but how they manifest today, or how we use expression to address them has. We see this especially with use of technology in art making.

On a more formal level, what was great was that it was actually a very inclusive show where you experienced the whole spectrum of visual making, including performance which is often missed here.

The space as a non-white cube space was also significant here, where neutrality is absent, and you are forced to confront the multiple layers and the history of the site. Though going up the stairs was a big bloody museebat (problem), I loved the way Aziz’s work was placed there, because from the beginning then it sets the tone of the show, and it really does it well. That text with the fire extinguisher and other little features on the wall were great. They were just great. Because that suddenly tells you, okay, so now you’re in to look at all of this.

You go up and then you’ve got the two rooms on either side… the one on left was a little more enigmatic for me because I felt you needed more time to be able to engage with that work in order to fully absorb it the three video pieces. And on the right, of course, there was Lali Khalid and Ujala Hayat – which I thought worked really well. It was extremely well curated as it allowed the viewer the opportunity to encounter the space in a reflective way.

Then you enter the large open hall, and you are going from work to work, all the way around. Curatorially, I felt, that the space could have been punctured a little bit more. One was bombarded with a vast array of ideas and practices, so to me, some pauses would have been nicer. Don’t get me wrong, the location was terrific, and so was the show. Every little corner was energetic… every wall had a certain kind of pulsation about it, and really it was the only serious collateral event, actually. But with “pauses”, perhaps what I’m saying is there needs to be a Part 2 where there can be a more focused dialogue!! 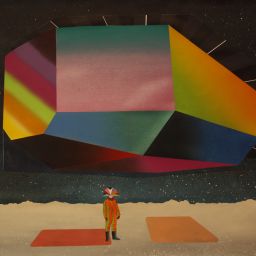 Basim Magdy at Museum of Contemporary Art Chicago Basim Magdy (b. 1977 Assiut, Egypt) is an Egyptian artist based in…