Basim Magdy (b. 1977 Assiut, Egypt) is an Egyptian artist based in Switzerland. He is currently showing at the Museum of Contemporary Art Chicago (Dec 10- Mar 19, 2017). Magdy’s theater of the absurd takes us through a riveting maze of fluorescent landscapes and poetic dramas in which we clutch at straws to find a narrative worthy of a plot with a beginning, middle and end. But we fail each time so it is better to absorb the sensuousness of the kitsch, savor the zest of the incongruous and bask in the glories of Magdy’s non-poetry.

Much of Magdy’s references are drawn from an event or incident. The reference of one of his videos ‘Turtles all the way Down’ is from Stephen Hawking’s book in which Hawking talks about a grand scientist giving a lecture about the earth and is interrupted by an old lady who tells him that it is common knowledge that the earth is actually a flat plate balancing on a turtle’s back. When asked caustically what the turtle was supposedly standing on, she replies, ‘it’s turtles all the way down!”

Allusions to science and science fiction, technology, advertising, mythology, story-telling abound in Magdy’s work giving it the shades of effervescence that are both teleological and grounded in present-day issues of societal dogma and pretense. Magdy’s shifting materiality is also an allusion to the sci-fi futuristic but grim post-apocalyptic sensibility of his works. He uses what he calls ‘pickling’, chemically-altering analog film and photographic material with household chemicals and has been known to seep slides in Coca-Cola to layer the works with strangest colors. In contrast, the films he creates are moving visions of his static works except that they are darker and full of trepidation. But the videos have the same lack of lack of space-time continuum about them as do the works on paper.

Even though there abounds a sense of brilliant color in Magdy’s works, no cheer pervades his work. In an interview to e-flux he said “Maybe I’m more interested in issues that are not particularly pleasant, but I have to say that my favourite reaction to the work I make is when people look at it and smile or laugh”. (http://www.e-flux.com/announcements/29646/basim-magdy-artist-of-the-year-2016/).

There is however little room for laughter in Magdy’s work or even humour, cryptic or otherwise. There is a re-telling of events in parallel realities that speak of crushed hopes and aspirations, political dictatorships, incessant displays of power and collective dystopias, all too familiar to third world scenarios. In most artists’ works, titles play an insignificant role, but Magdy uses his titles as a tertiary form of articulation after the image and materiality. Some include: ‘Every Decade Memory Poses as a Container Heavier than its Carrier’ and The Moment You Realize Eternity is a One Way Track’, and ‘They Shot a Movie with Frozen Butterflies and Cautious Optimism — sheer poetry without meter; ambiguous but words that clutch the heart like the images themselves.

The meteoric success and subsequent failure of what we now refer euphemistically to as the Arab Spring, was bound to have an extraordinary effect on Magdy. He says he couldn’t work and only followed the news and it was then that he began to retrieve the images from his photographic archives to makes sense of the present situation –photographs and lines of poetry that he wrote at a very young age – all of it disjointed, incoherent, fragmented, almost unintelligible pieces of stray narratives by themselves. Put together, he says in an interview in Artforum (500 words/As told to Stephanie Bailey, 09/2013) “In my mind, the entire series constructs a loose narrative based on a group of people who keep trying to succeed but continually fail”. 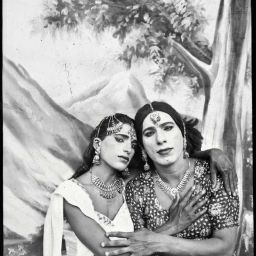 River in an Ocean, an exhibition curated by Abdullah Qureshi and Natasha Malik, took place from 20 – 31 March…