For the second time in a row, two Pakistani artists have been invited to participate in the prestigious exhibition Documenta, held every five years in Kassel Germany. Rasheed Araeen a Pakistan born British artist and Lala Rukh from Lahore will be showing their work at Documenta 14, which for the first time will be showing in two cities as parallel sites – Athens and Kassel. In Documenta 13, five years ago, Bani Abidi and Khadim Ali set the ball rolling by being the first Pakistani artists to be invited to Documenta.

Rasheed Araeen’s installation in a busy Athens square called ‘Shamiyaana — Food for Thought: Thought for Change’ draws from concerns that he has been articulating for many years now. The work comprises a series of makeshift tents or what we know better as ‘Shamiyaanas’, wedding tents with colorful geometric patterns which he has incorporated into his practice and linked to other more profound geometries of Islamic variations. But these tents are not simply shelters; a Greek non-profit organization has arranged for free food to be distributed here twice a day so that anyone can eat two free meals a day. The Shamiyaana thus brings together friends or strangers over a meal, and many Syrian refugees living in Athens as well. 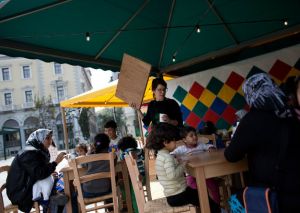 Though Araeen’s installation ‘Shamiyaana’ fits in with his ideology, more surprising is the fact that in 2001, Araeen offered us his vision of the ‘Mediterranea’ project. He pointed to the fact that the Mediterranean was in fact a nexus of three continents, three cultures and three religions and provided us a space from where a new civilization could emerge. In his book Art Beyond Art Eco Aesthetics: A Manifesto for the 21st Century in 2001, Araeen wrote “All the dialogic potential of its seas, through which people must be ale to move freely carrying with them the gifts of knowledge for each other”.

If Araeen’s views sound Quixotic, he is painfully aware of the pitfalls. He says “This may be a daydream or the naïve fantasy of an artist, but it is better to daydream with a hope of a better future than allow oneself to be dehumanized and consumed by the greed for money and individual power”.

The other artist included in Documenta is the intrepid Lala Rukh. Lala Rukh’s quiet meditative works are the result of decades of thought that have been siphoned slowly towards a minimalist reflexive. She has built up her work over the decades to reach the point where nothingness means everything and the fewer the notations, the larger the discourse. Over the years, Lala Rukh has played the role of feminist and activist — as one of the founder members of Women’s Action Forum or WAF, the group that struggled against the despot Zia ul Haq’s draconian laws against women – as an academician and vital member of the National College of Arts, Lahore and as an interdisciplinary art practitioner who always brought innovation to the field.

Lala Rukh grew up in a family where the arts were a way of life and she was tutored in classical music and calligraphy. If we discover these elements in her art, it is not because Lala Rukh interjects them as motifs, it is because they spill into her practice as organic rudiments of her identity. The series entitled Hieroglyphs are based on beats of the tabla or the ‘qat’ and ‘taal’ and the white dots and dashes are pared down to a rhythmic cardiogram against the deep blackness of the background. In the other series of ‘Hieroglyphs’, the scribble resembles a calligraphic notation.

In the series of works ‘River in an Ocean’, we see how Lala Rukh has morphed her practice from more to less, as she withdraws from volubility to reticence and the journey is exciting to view in retrospect.

Rasheed Araeen has taken exception to the description by the writer who says that Araeen is a “Pakistan born British artist ”
He says :
Whoever described me as “a Pakistani born British artist” is totally wrong. First, I was born in Karachi in 1935, when Karachi was a city of the British India; after 1947 it became the capital of newly born Pakistan, and I became a Pakistani. Since 1964 I’ve lived in London, but I was never considered by the British establishment as a British artist. So, I’m still a Pakistani artist and I’m proud of being so. You can say that Rasheed Araeen is a Pakistani artist who lives in London; but also occasionally in Karachi as he has a studio there”

As Editor, I take full responsibility for this error
Nafisa Rizvi