Ai Weiwei in Conversation with Ian Buruma at the Chicago Humanities Festival, April 2018 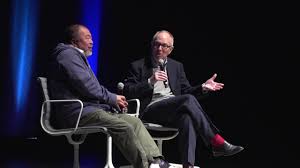 The Chicago Humanities Festival hosted a talk between artist Ai Weiwei and Ian Buruma in April 2018 titled Humanity. It came with a little eponymous booklet full of platitudes like “I always see humanity as one. If someone’s rights are violated, we are all deeply hurt”. Anyone following Ai Weiwei on social media would have understood Buruma’s first query to the artist about his predilection for selfies. Ai is incessant in his uploading of selfies with people he meets. He almost never posts pictures of his work in progress or anything of distinction that he may have noticed as other artists are wont to do. I have known people to unfollow Weiwei on Instagram for this banal ubiquity. The fact is that in this millennium where the extraordinary image reigns universal and absolute over the exhilarating idea, or the superlative achievement and way above the supreme word, a selfie is the most humdrum image of all. Before answering the question, Weiwei in his witty manner took out his phone and snapped a quick selfie of himself with Buruma on the stage. He then explained it as his way of using technology to preserve memories of people he had met as others write diaries or make sketches.

The artist is adored by the West, although it is to be considered how much his 81-day incarceration by Chinese authorities accounts for his global attention. But Weiwei’s biographical history is a captivating one that began long before his birth. His father Ai Qing was a celebrated poet in his time and Weiwei was born in Beijing in 1957. Mao unleashed his fury on Weiwei’s father for what he believed was his intellectual rightist stance. The family was sent to what was euphemistically called a re-education center and he spent those years cleaning toilets. The family only returned to Beijing when Mao died in 1976. Ai Weiwei left China for New York in 1983, facing great pressure from Chinese authorities. He returned to China a decade later, where he was a dogged activist and garnered protests against the Government. In 2012 he tormented the officials by setting up video cameras in his house. “In my life, there is so much surveillance and monitoring – my phone, my computer … Our office has been searched, I have been searched, every day I am being followed, there are surveillance cameras in front of my house,” he said. “So, I was wondering, why don’t I put some (cameras) in there so people can see all my activities. I can do that and I hope the other party (authorities) can also show some transparency,” he told the news agency AFP. It became the Weiwei Cam which relayed his activities round the clock every day to millions of people on the internet and enraged the authorities as expected. Finally, they gave in and shut down the cameras in his house.

When Ian Buruma asked Weiwei about his engagement with the 2008 earthquake that struck the Sichuan province of China, Weiwei explained that he had been curious as to how many people had really died, specifically school children, since the state-run media was reticent about such matters. Since individual homes of the poor were built by them and followed no building regulations, the government could not be held accountable. But schools were government-built and the lives lost had happened on their watch. Ai Weiwei set up a blog on the internet and began asking ordinary people to help him find out how many children had died in the earthquake. It made the authorities frantic and they intercepted many of locals who were trying to unearth details about the children and writing down names and dates of birth. There were arrests and information was deleted making the job harder. Weiwei says in a February 2018 interview in The Guardian, London, “If I hadn’t engaged with that tragedy, I would not be the artist I am today. I cannot imagine I’d still be making art if I wasn’t reflecting my political views.

In 2011, when Ai Weiwei was leaving for the US, he was detained by the Chinese and taken to an unknown facility and kept for 81 days without informing his family as to his whereabouts and there was global pressure to release him. Weiwei’s diorama of his time behind bars is a compelling narrative and represents the humiliations and degradation of prisoners by Chinese guards. He depicts realistic figures of himself and the guards who stood silently watching him not two feet away as he ate, slept, used the toilet, which audiences could see through a tiny peephole inside large metal containers

As was expected, the conversation turned to the famous incident of the smashing of the urn. In 1995, Ai deliberately shattered a 2000-year old Chinese Han dynasty ceremonial urn (makes one wince at the thought of it even if it was for the sake  of art!), with the purpose of erasing the past and building a future in accordance with Mao’s dictums. But in 2014, a small Miami artist Maximo Caminero picked up a million-dollar Han dynasty urn displayed by Weiwei and as part of an installation and smashed it in protest against the gallery’s rules of not showing enough works by local artists. Four years later Weiwei still sounds irate. “I destroyed a Han dynasty vase”, he says. “The guy from Miami destroyed my vase!”. Ignoring a question by Buruma who tries to equate the reasons for the two artists destroying the vases, Weiwei says “I’m still waiting for the lawyer from the Han dynasty to sue me”

The conversation between Ian Buruma and Ai Weiwei turned to Chinese art and what Chinese artists were doing today.

IB: Since the revolution so much of (tradition classical Chinese painting) has been destroyed and it must be very difficult for a Chinese artist, whether you’re a writer or a poet or a painter to still work in a traditional manner or to really modernize it because people don’t know enough about it anymore; it’s been cut. Is that one reason why conceptual art has become so common in modern Chinese art, so that it’s about ideas and renewing something which is cut off from its traditional roots?

AW: Yes, but we are being forcefully very brutally being cut off (from our traditions) and we (had to) switch to a very modern language and by changing the language the meaning totally changed and also, in the language so much of the vocabulary was relating to the Russian revolution. We grew up with the education of getting rid of the past. Anything old was not good for the revolution. That’s the kind of mindset (we had), the whole nation was purified through this extreme brainwashing technique for decades. The young kids were rebounding against something, they didn’t know what they were fighting against, they had this attitude that they didn’t trust the system, they didn’t trust the Communists, but they didn’t know how or why because they didn’t have the supporting intellectual base so they couldn’t really make an argument. You can often see children they don’t like something but they don’t know why they don’t like it, they don’t have an argument. At the same time, there’s no commercialization, no art can be sold, there’s no galleries, or collectors or museums or people appreciating art. Art is a dangerous act. So there’s a lot of mental activity, which you can call closer to conceptual art but there are no newspapers or magazines where you can print a piece of art. So that’s how you can mentally become more active. Art in China is completely dominated by the (western) market.

IB: But it’s a very peculiar market because in the case of Chinese art, and I was wondering what you think of this that one thing that became very popular especially with western collectors was the art made by people of your generation that kind of turned Mao Zedong into a Mickey Mouse figure, I mean almost as a sort of cartoon and a lot of painting is of Mao and Red Guards and so on and Mao is probably the biggest mass murderer of the 20th century and you cannot imagine German artists using Hitler in that way or even Russian artists using Stalin. How did Mao become a sort of Disney cartoon?

AW: Well Mao is not exactly like Hitler, you still have a strong influence specially in the student movement at Berkeley in the 60s or even globally and they have this ideology in supporting Third World nations against American imperialism. So, the idea still functions in many areas. Chinese artists are very much like Chinese cooks; when they open a restaurant in Chicago or Germany or Berlin, they call it a Chinese dish but it doesn’t taste like Chinese; it tastes more like a hamburger

AW: They try to please Western collectors, they try to recognize the value in Chinese art and say that’s ok that’s something we can share

There ensues a dialogue about the meaning and understanding of shit which had the audience titillated but under the humor it was an important discussion. Only the essence is produced here

IB: It started off with a remark about President Trump and I said that one reason why I think he’s very dangerous is that he’s appealing to the sort of worst and most violent instincts of people and you’ve said that that kind of shit is always there and he’s like a stick that’s stirring it and you said you like to stir shit of a different kind so I would like to know what that is

AW: Well shit is deep and profound because it’s a by-product (of us) it’s a part of us. We all have some shit with us travelling or sitting or in discussion about it. I don’t think Trump is a problem, I don’t think he’s dangerous even, he appears a little ridiculous sometimes but he’s something of our deep illness in this society. He’s a product of this so-called democracy. He’s elected; of course, the left would point fingers and say that he is there because of Russians. I don’t believe that. I think he’s there because he’s there, and he’s talking about American interests and he presents American values in a certain degree and we shouldn’t say he doesn’t belong here and I’m sure he’s going to bring more (suppression) but we’re all part of it and if we’re not satisfied, this is a democratic society, this is a perfect society, we have freedom of speech and sit-in rights

IB: What is the role of the artist in trying to make the best of things?

When AW objects to the idea that the artist does not necessarily have to have a role, Ian Buruma concurs and continues:

AW: I think I was chosen. It was not my choice to be like this. I followed some kind of calling which I didn’t even understand. I’m the product of some unknown forces. Maybe anti-China forces

IB: So, you’re the Black Hand

Some portions of the conversation may seem grammatically discordant which may have arisen due to Ai Weiwei’s hesitation with the English language.