A Qur’an For Americans of Today, Presented by An American Artist of Today

As a Muslim, the American Qur’an is one of those beguiling publications that you are compelled to explore even if it is only for its bizarre title. And it gets ‘curiouser and curiouser’. The spectacular hard bound book is full of illustrations mimicking an illustrated manuscript, the kind we are accustomed to seeing, wide-eyed, in museums, in awe and veneration at the decorative embellishments and the painstaking delicacy of the text written by the hand of the calligrapher compelled by the passion of the One Above. But here, in 2018 is a Qur’an illustrated by an American artist, for the American people containing images of everyday American life – industry, farming, weddings, births, sports, children playing on the streets, people eating different foods, offices. We find ourselves reeling with the banality of the imagery! Crushed by the trivialization of divinity! Flattened by the inconsequentiality of the street! This will not do! Or will it?

Sandow Birk is the artist responsible for this sublime travesty. If you grope around in the quest for answers, you will discover ventures of this magnitude are Birk’s calling in life. He takes on large, no…gargantuan, time-unsensitive works, less like challenges and more like social and political battles. Birk lives in Los Angeles and his work has gravitated naturally towards concerns like inner city violence, prisons, graffiti, surfing – which is his passion, but he has been unable to stay detached from the horrors of the Gulf wars and their consequences. Birk graduated from Otis/Parson’s Art Institute and was a recipient of an NEA International Travel Grant to Mexico City in 1995 to study mural painting, a Guggenheim Fellowship in 1996, and a Fulbright Fellowship for painting to Rio de Janeiro for 1997. In 1999 he was awarded a Getty Fellowship for painting, followed by a City of Los Angeles (COLA) Fellowship in 2001. In 2007 he was an artist in residence at the Smithsonian Institute in Washington, DC, and at the Cité Internationale des Arts in Paris in 2008

Among many of Birk’s works are his illustrated version of Dante’s Divine Comedy, that grand capacious epic replete with high drama involving grandiose events of sin, punishment and redemption, Not surprisingly, it took him five years to complete. He adapted Dante’s version to a local vernacular, more in tune with the American idiom of the street. The text was divided into the three sections as Dante’s Divine Comedy is – Inferno, Purgatorio, Paradiso, and was printed with 60 original lithographs each. Birk made paintings for each section and then went on to make a feature film created with paper puppets which was shown at film festivals in Europe

There are a host of other ventures like this one. Smog and Thunder: The Great War of the Californias is a fictitious war that Birk created to produce a set of expansive paintings representing the unending violence on the streets of the two cities. He uses the metaphor of civil war to characterize the dystopian underbelly of the large cities of US where there are far too many avoidable deaths particularly of underprivileged young people. In the Battle of San Fransisco, which extends 7 feet by 7 feet in size, he uses the span of the canvas to elongate the landscape and mimic say, a 16th century battle replete with canons and horses but quizzically adds fighter jets in the air, and broken power lines. The painting is an appropriation of Albrecht Altdorfer’s The Battle of Alexander at Issus, from 1529, although Birk’s version is much more detailed, close and up front, and therefore more unsettling. The painting Injustice Leading Greed and Opportunity is obviously inspired by Delacroix’s Liberty Leading the People but the details are phenomenal in their present-day street culture references.

Birk’s most ambitious work in terms of scale is called American Procession depicting a silent parade of figures from American history, not all of them heroes. The work constitutes three wood block panels and measures 40 feet in length and 48 feet in height. Though the vastness of the piece is almost disconcerting and distracting, the line-up of people is meant to be thoughtful and to inspire dialogue as to the contributions, good or bad, made by these influencers.

But Birk’s seminal piece has been the American Qur’an, which is difficult to say is due to bias or its actual weighty substantiveness. Notwithstanding, it has undoubtedly been a colossal undertaking. All 114 Surahs were illustrated in keeping with their meaning. For example, when the Book talks of Noah’s Ark and the great flood engulfing the world, the artist shows scenes from Hurricane Katrina which struck the US Gulf Coast in 2005 and inundated the city of New Orleans. For the Surah titled Smoke, Birk illustrated scenes of the World Trade Center on fire on 9/11. He paints the story of the seven sleepers in the Cave in the Qur’an likening it to the event of the Upper Big Branch mine explosion in West Virginia. There are other such connections, some more oblique than others, but it is apparent that Birk has gone to great lengths to absorb the Book’s finer details and link it to everyday life and events in the US. He has even endeavored to incorporate scenes from all fifty states in the US. In addition, Birk created a font that he felt would simulate graffiti to go with the contemporary, neoteric, hip feel of the book and wrote out each word by hand. The prevalent aniconism is deliberate and can allay fears of subterfuge by skeptical Muslims. 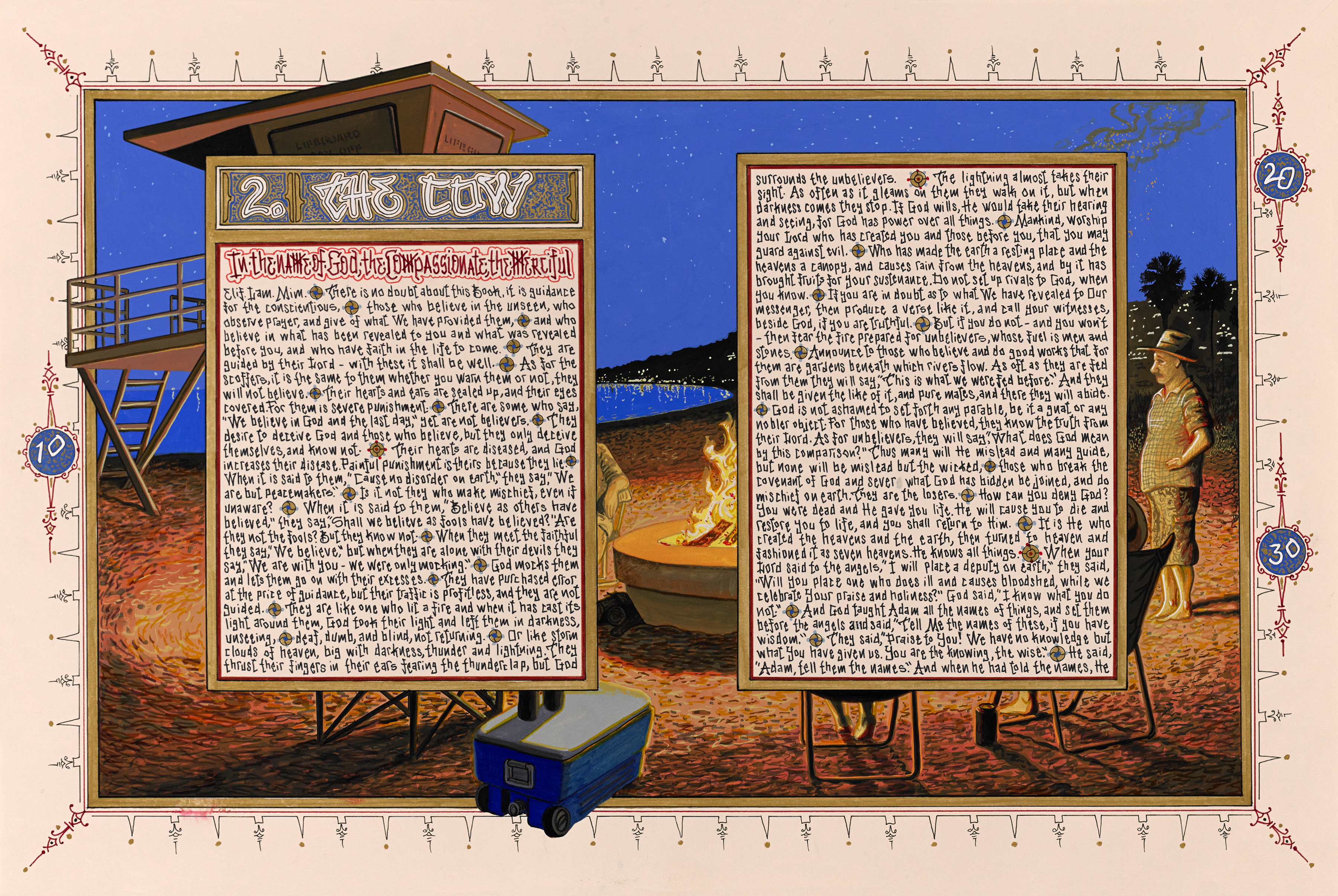 Birk however, does not mention that the translation is the 1861 one by John Rodwell who was the rector at St Ethelburga’s church in London and it was the first English translation to arrange the Surahs chronologically. Interestingly, this is also the church of William Bedwell who was selected in 1604 as one of the original translators for the King James Bible. Rodwell’s translation was received with criticism instead of kudos, which is an expected and common reaction from Muslims and goes back to the day the Prophet Mohammad (pbuh) passed away . As Sandow Birk explained, it was simply a matter of logistics: it was the only translation for which copyright issues would not have become an obstacle. 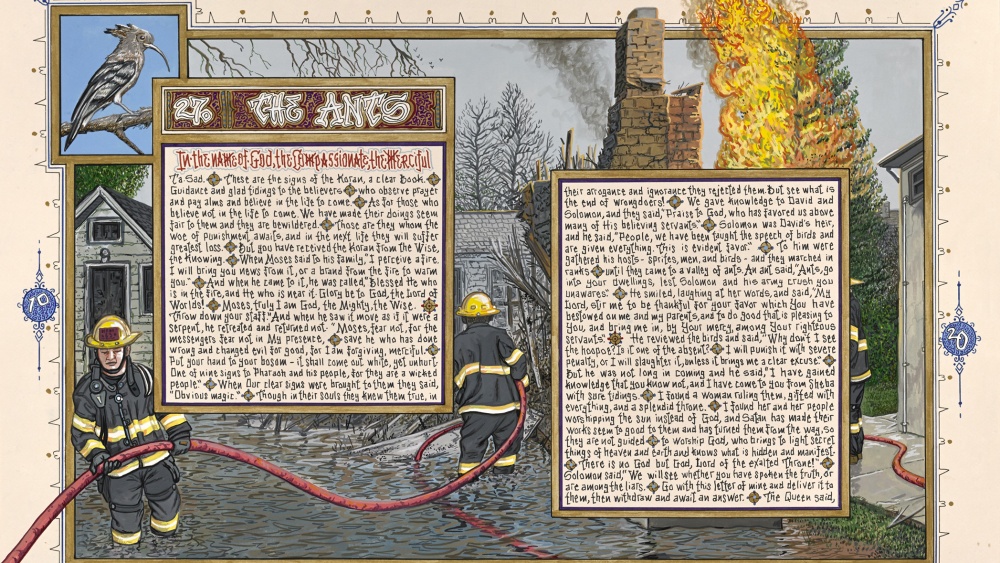 Birk was invited by Sabeel Center in Des Plaines, a suburb of Chicago. Sabeel Center is a Muslim community center that aims to promote cultural and educational learning within the paradigms of religious freedoms. By Birk’s presentation, it could be ascertained that he had gained insight into what the Qur’an was endeavoring to say about life and laws and that he was ready to take on any skepticism that would be hurled his way. But strangely enough, what came through in his words was a simple message that pretty much stymied all notions of negativity. He told the audience that he had taken on the project as a result of the exasperation he felt when people around him continued to say ad nauseum that Islam was a violent religion and bred violent followers.  (Zareena Grewal tells us in her notes to the American Qur’an “The terrorist attacks of September 11, 2001, made English translations of the Qur’an into instant best-sellers, with American bookstores back-ordered for weeks”). 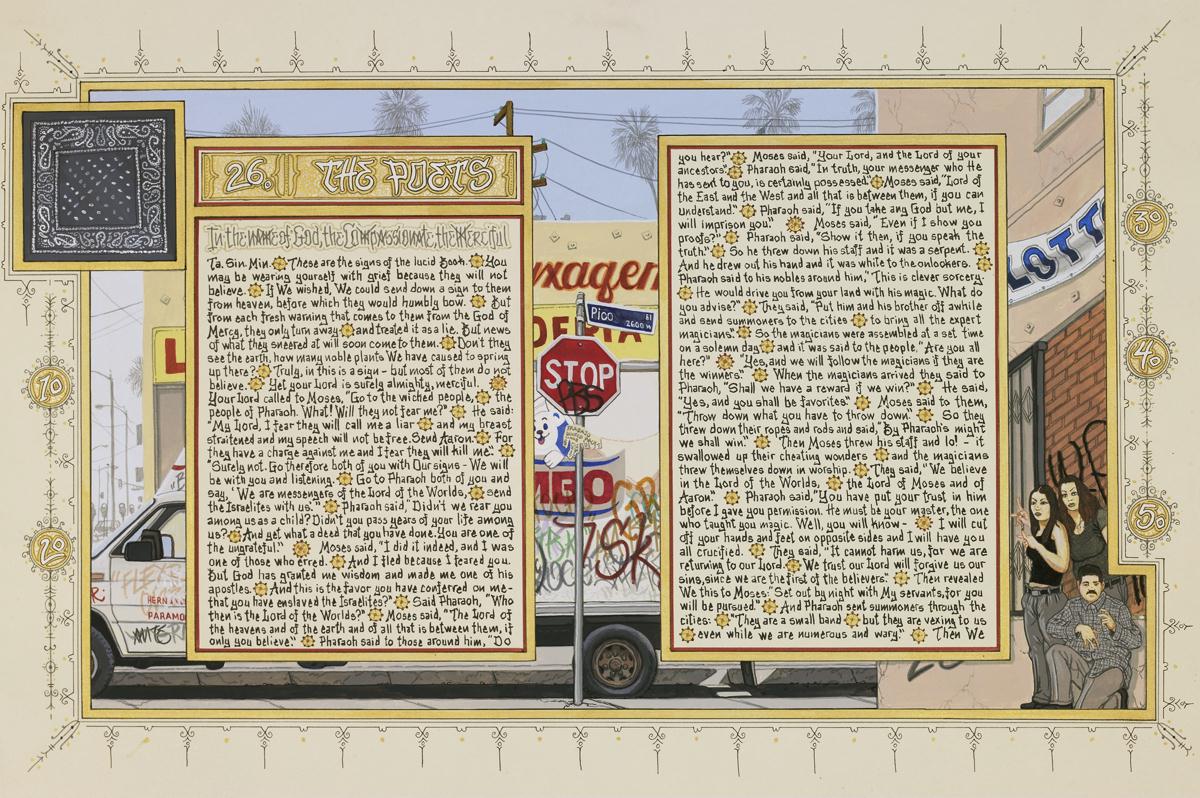 As an ardent surfer, Birk accompanied by his wife and kids has traveled to many parts of the world, including Muslim countries where they have found the people to be kind and welcoming and the culture to be rich and fascinating. It was a seemingly simple idea — to negate specious, misinformed assumptions. But we know what a leviathan undertaking that can be. For most of the world, in fact for many Muslims too, the Book is inscrutable. From his previous projects, we can presume that Birk was not unaware of the pitfalls, the travails and exertions of taking on a project of this nature. But it was perhaps unlike any that he had undertaken before. It took him nine years to complete and he had to sell the illustrations when he would complete them so that he could continue painting the rest of the Surahs. 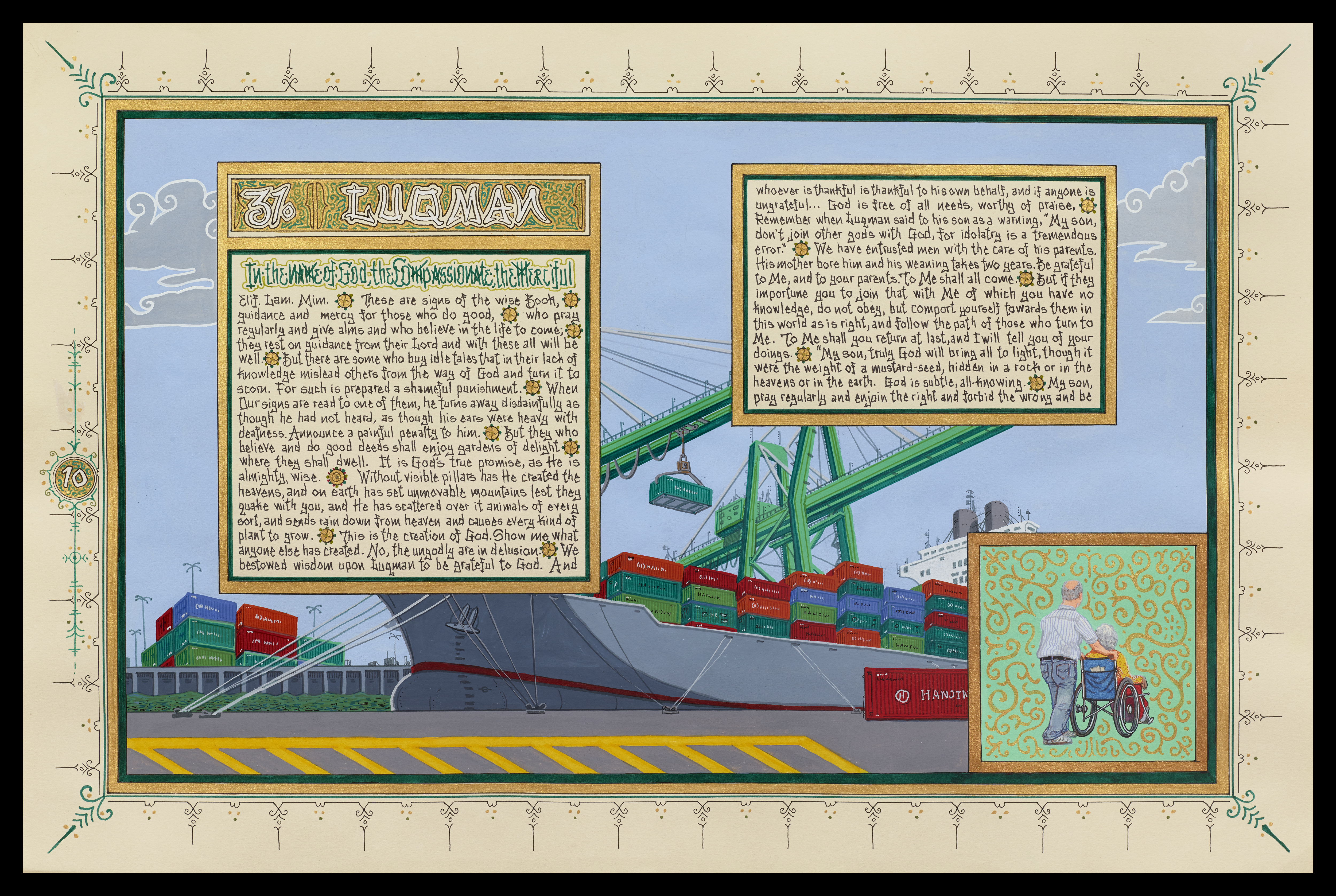 Zareena Grewal’s indulgent criticism that Birk loses out on “rhyming musical quality of the Qur’an’s Arabic, which lends itself to memorization the shifting and fluid grammatical structures such as perspective and tense, the linguistic, the rhetorical, and numerical patterns embedded within the text” sounds more like a mother reminiscing with her child about the loss of happy days. She knows he has lost out on a part of the Qur’an that he would have enjoyed and loved.

It is unlikely that American Qur’an will be bought and read by Muslims. As a people we are not readers, nor critical thinkers. (But then, that has become a universal norm) I am inclined to believe that it is with a great squeamishness that people of the faith will turn the pages, in apprehension of what they may lay their eyes upon and the blasphemy they may commit just by their glance. If we were readers and had read the esteemed scholar Oleg Grabar in The formation of Islamic Art, we would have read that, speaking about the representation of living beings he says  “While it is fairly well known by now that the Koran contains no prohibition of such representations, the undeniable denunciations of artists and of representations found in many traditions about the life of the Prophet are taken as genuine expressions of an original  Muslim attitude.” And we could go on guiltlessly, to enjoy the American Qur’an with all its inferential illustrations. 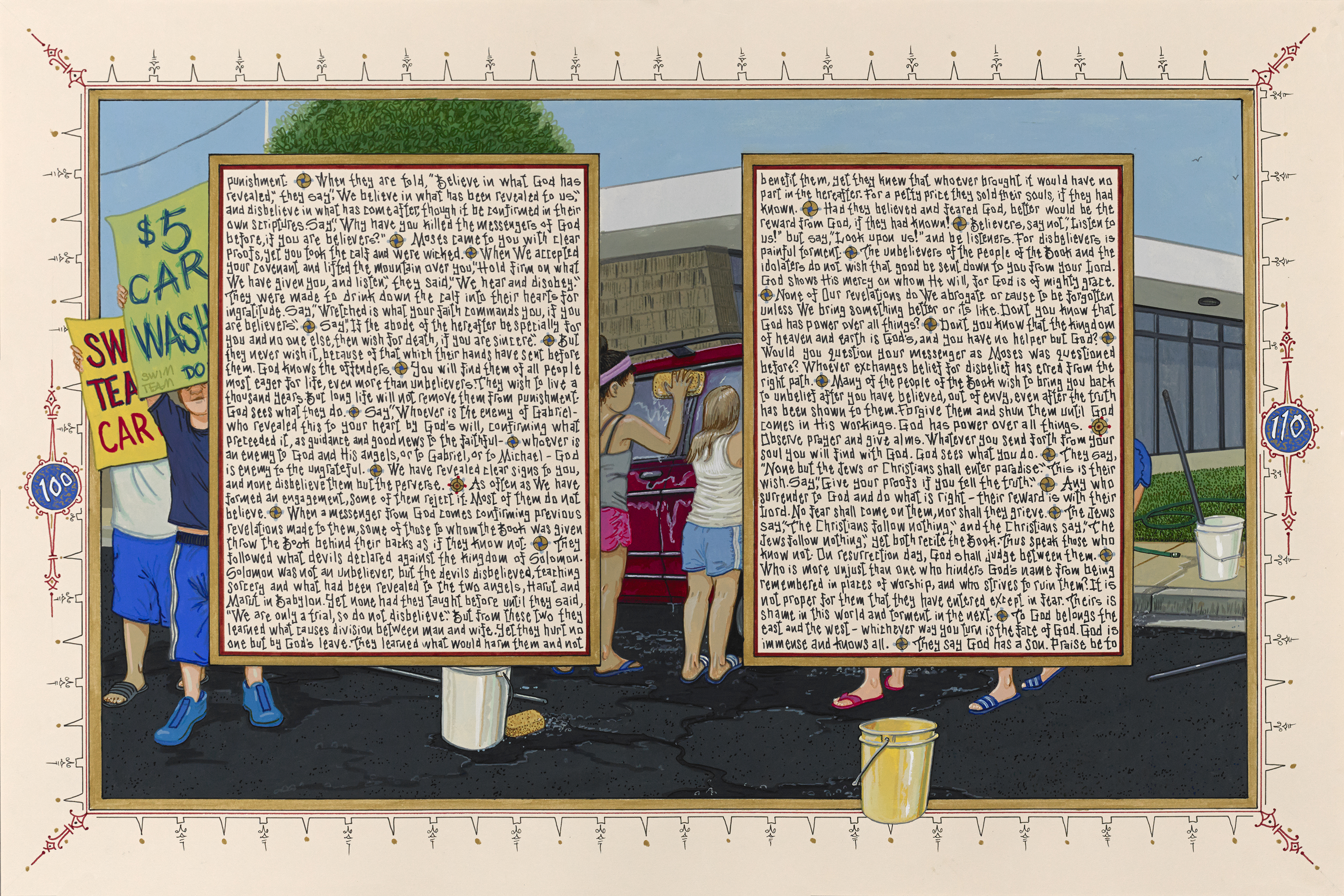 During his journey with the Qur’an Birk stopped on the shores of its magnificence and was inspired to add objects of interest along the way. His wife Elyse is a skilled and intuitive ceramic artist and between the two they create magical works of art that are relevant, quirky and edgy. The Medallion and CCTV are some examples.

Yet the Qur’an as we know rests in another realm of ontological substance and understanding. We speak of metaphysical and theological constituents but the Quran far surpasses these basic existential doctrines and tenets. I believe Birk has gained this insight even if he doesn’t make it apparent. For most Muslims that is far more than they can comprehend in one lifetime and the beauty of the pages and the exciting visual narratives that lead you into the text are enough to satiate a hungry appetite for faith and belief